Reflexology is a fascinating therapy.......

Edwin Bowers brought Fitzgerald's work to the public's attention in 1915 when he wrote an article entitled 'To Stop That Toothache, Squeeze Your Toe'.  Dr Joe Riley refined Zone Therapy by adding four horizontal zones and by locating pressure points on the feet and ears, after learning all he knew from Dr Fitzgerald.

Dr Eunice Ingham worked closely with Dr Riley and started developing her foot reflex theory in the 1930's.  She treated hundreds of patients, carefully checking the reflex point of contact and she determined that the reflexes on the feet were exact mirror images of the organs of the body.  Her first book, 'Stories The Feet Can Tell' was published in 1938.  In this book, she documented her cases and mapped out the reflexes of the foot as they are today.

A former student of Ingham's called Doreen Bailey brought reflexology to England in 1966, and her methods are still taught today. 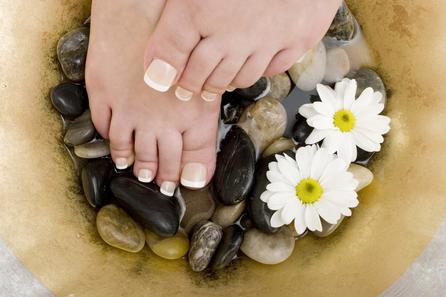 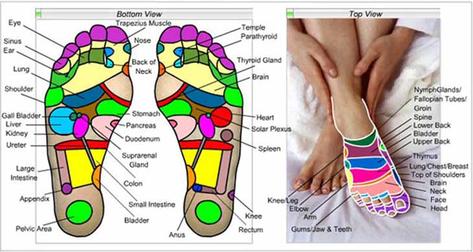 Reflexologists believe that the organs of the body are mapped onto reflex points on the feet. A reflex describes a reaction or response.  In reflexology, when a reflex point is stimulated it produces a response in the body.  The reflex points are stimulated by a unique thumb and finger walking technique. A reflexology treatment also includes a relaxing foot massage before and after the treatment, which warms and relaxes the feet.

Reflexology works on all systems of the body, and can be used to benefit many ailments.  It enhances nerve and blood supply, relaxes, and helps to return the body to homeostasis (a state of balance).  A balanced body is more able to fight illness and infection. A reflexologists  fingers are very sensitive and can feel any imbalances in the reflex points, which can present themselves in the feet as crystal-like deposits, tension or puffiness.

Some clients experience reactions (known as a "healing crisis") after a reflexology treatment, which are just symptoms of the body re-balancing itself. A healing crisis commonly just manifests as general tiredness or headaches.  However, most clients report a feeling of 'lightness' and deep relaxation after a treatment.

The History of Reflexology

There is evidence that reflexolgy dates back to Ancient Egyptian times, according to inscriptions found in the physician Ankhamor's tomb at Saqqara  in Egypt.

Three doctors in the 16th Century published books on 'Zone Therapy'. Scientific research on reflexology began in the last century. Experiments were carried out into the nervous system and reflex responses before Dr William Fitzgerald discovered the systemised form of foot treatment. He called it Zone Therapy, and brought it to the attention of the medical community between 1915 and 1917.